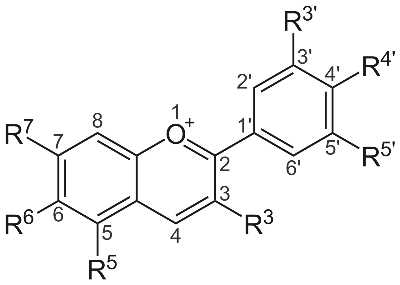 Anthocyanins are water-soluble glycosides of polyhydroxyl and polymethoxyl derivatives of 2-phenylbenzopyrylium or flavylium salts. Individual anthocyanins differ in the number of hydroxyl groups present in the molecule; the degree of methylation of these hydroxyl groups; the nature, number and location of sugars attached to the molecule; and the number and the nature of aliphatic or aromatic acids attached to the sugars in the molecule.[1],[2],[3] Hundreds of anthocyanins have been isolated and chemically characterized by spectrometric tools; cyanidins and their derivatives are the most common anthocyanins present in vegetables, fruits, and flowers.[4]

In a new 2017 study by the University of Exeter, healthy people who consumed concentrated blueberry every day for 12 weeks showed improvements in cognitive function, blood flow to the brain, and activation of the brain while carrying out cognitive tests. There was also evidence suggesting improvement in working memory. Research suggests that a large part of the cognitive protection that certain berries provide is due to nerve cell protection from oxidative damage.

There are no known side effects in the current research on this phytonutrient.

Anthocyanin is a naturally derived phytonutrient and is approved as a dietary supplement component under provisions of the Dietary Supplement Health and Education Act of 1994.

1. Hertog MG, et al. (1993). Intake of potentially anticarcinogenic flavonoids and their determinants in adults in the Netherlands. Nutr Cancer; 20:21-9.